I had no idea where to go from Amaldia.

Ancient Olympia was only an hour down the road, but a visit wouldn’t take more than a couple of hours. The girl working at the campsite had baggy traveller pants, so I assumed would have some good beta on shit to do. I was given a hit list for my time in Greece:
1) Temple of Apollo
2) Walks along the River Nada
3) Voidokilia Beach
4) An ancient theatre east of Argos
5) Athens

She waved Olympia off as a waste of time but the residual sports scientist in me still wanted to visit (as well as strawpedo Bacardi breezers, but this was neither the place or time). Leaving my neck tube and homemade helmet lock in a bush at the campsite, I left to pay tribute at the birthplace of naked fighting and jumping.

Turns out campsite girl is wise. Disappointingly, there were no naked fighters or jumpers. Apparently not for a couple of thousand years. I pondered where my €6 Euros entrance fee was being spent.
Broken rocks and pillars not being especially close to my heart I took some photos, left some footprints and trundled back through the tarted up main street to my bike. I shared my beta with a couple of motorcycling Germans on holiday. They seemed happy enough, but I can never tell with Germans on Holiday, they might have not listened to a word. I wanted to strawpedo a Bacardi breezer.

Still thinking I was going to return to the campsite for my accidentally abandoned gear I flew past the turning for the temple of Apollo, choosing to visit it on the way back.

Down the road I overshot the junction for the Nada river, busted out a sweet U-turn and wove through fig trees on a road parallel to the river. For miles. The only glimpses of the river I stole showed it as a depressed trickle in a wide sandy bed, picked away for irrigation of the nearby farms. Correctly assuming the hint referred to a part of the Nada far inland I cancelled my search for idyllic plunge pools and, pulling another sweet sweet U-turn followed the thin and undulating road back to the coast.

An hour or so later, riding through olive trees in parched saffron soil, I zoned in on the junction for the beach. But I forgot I was meant to follow signs for Voidokilia and went to the wrong beach for a lie down. A feisty teenage dog with yellow gunk pouring from his eyes and a mutated, pale left eye wouldn’t leave me alone. Eye infections were not what I needed right now and thankfully he took interest in a group of scared teenagers. Feeling acutely let down with the average beach I brushed the sand out of my crack and picked up a road to Kalamata for no reason other than it being in capital letters on my map. I shed a single tear for my abandoned gear. I was no longer going back to the campsite. No longer going to visit the temple of Apollo.

The miles flew by, Kalamata grew from the horizon and faded into the mirrors. I had no reason to explore and figured there was enough time to reach Sparta to see all the excessively muscular men in red robes. You know, like in that movie. There was one road running direct to Sparta, looked pretty straight, about 50km long according to my satnav.

Looked pretty straight.. My satnav is a bastard.

Carving up and down the mountain was a baptism of fire for my fresh rear tyre. The rubber slipped out, the bike dropping suddenly until friction regained its hold of the road and whipped me back on track. Sportsbikes aren’t necessarily geared for drifting round corners.

Jaw on the handlebars in awe I’d climb to the very peak, level with the snowline on an adjacent mountain, before plunging into the dark and winding canyon road far below. Rocks had fallen recently on the road, littering my lane as it hugged the cliff sides. Caution knotted in my stomach while reckless abandon drove me ever faster forwards.

The whole process repeated. Back to the top of a peak with frosty fingers getting under my jacket and causing my breath to fog up the visor. Then back down headlong into a rocky abyss below. My front brakes were squeaking, pads or disks warping with each hard application. They’d have to suck it up for the mean time, loosing front brakes meant certain death, punctuated by impacts with trees and rocks.

High up another ridge, tiny houses that clustered along the valley floor far below came into sight. The tiptoes-on-footpegs riding was wearing me down but I was still high on the panoramas unfolding around me. The engine buzzed loudly in my already ringing ears. Eventually the rock faces enveloped the roads and I slowed to a roll, humbled, with my head craned upwards at cliffs above.

The valley had long since seen direct sunlight but the chill was fading with every metre I descended to Sparta. On the other side and tired, I filled my tank with petrol and myself with kebab (maybe two..but I’d forgotten to eat all day again, OK?). The city wasn’t like how I imagined it was. It wasn’t like the movies. All neon signs and parasols and no wells full of dead Persians. I can’t pretend my heart didn’t break a little. I broke my spear over my knee and took my fight to the foothills of the north, off-roading my bike up a rocky, clay forestry track and pitching my tent in the twilight. The wind breathed through the trees but the air was warm. I had my water and my snake fighting stick (not all the snakes I’ve seen were roadkill..) and an appetite for deep, deep sleep.

1) Temple of Apollo
2) Walks along the River Nada
3) Voidokilia Beach
All missed. But who ever needed a shitty temple, river or beach to have fun? 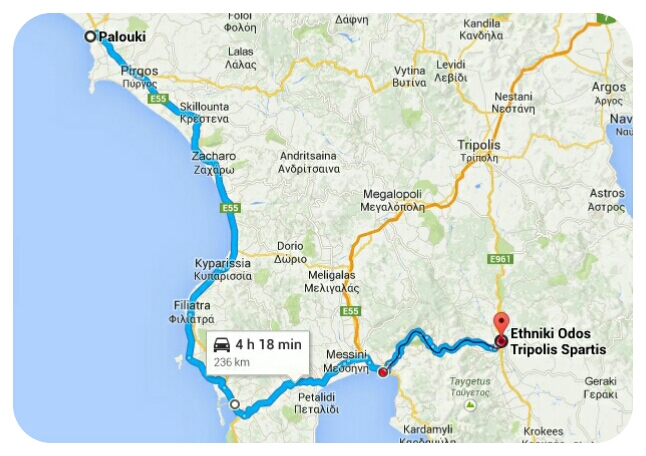